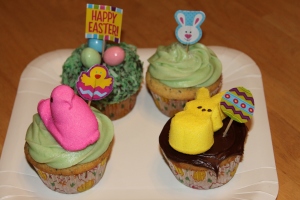 Treats for Bob’s Sunday School class and my Sunday School class!  The cupcake recipe comes from the “Hello, Cupcake!” cookbook by Karen Tack and Alan Richardson.  I just made up the decorations as I went along because, to be honest, after the graduation cupcakes and Melody’s fondant birthday cake, I was a little tired and burned out so these were just decorated on the fly.

3  In a mixing bowl, on medium speed, beat cream cheese, butter and sugar until light and fluffy, about 3 minutes.

4  Add eggs, one at a time, beating well after each addition.  Reduce speed to low and add flour mixture alternately with milk in batches, beginning and ending with flour and beating just until blended.  Stir in lemon peel.

5  Scoop batter into liners.  Bake until golden and toothpick inserted in center comes out clean, 15 – 20 minutes.  Remove from oven and cool completely.

For decorating, I used all the leftover frosting I had from the graduation cupcakes and the fondant cake so some of it was canned and some was homemade.  For the nest cupcakes, I dumped a bunch of coconut in a bowl and put about 10 drops of green food coloring in there and mixed it with a spoon until the coconut was green then I frosted the cupcakes and gently rolled them around the bowl until they were covered in coconut.  I found the liners and picks at the dollar store.