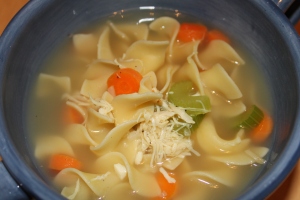 Today is my son Zach’s 22nd birthday and he is sick!  Bummer!  He went to the dr this afternoon and they said he has a virus so there’s not much they can do for him.  So I made him some homemade chicken noodle soup for his birthday dinner.  I like this recipe because it is so quick, easy and it tastes so soothing when you’re sick or it’s cold outside.  I’m giving you a quick version and then an even quicker version, both are good.  This is another recipe that I’ve had for so long that I can’t remember where it came from.

1 teaspoon pepper (do not omit this, it’s what gives the soup it’s kick!)

Bring water to a boil.  Add ingredients, breaking up chicken.   (I also add the juice from the can of chicken.)  Return to a boil, heat and simmer uncovered 12 – 15 minutes or until noodles are tender.  (This is the quicker version.)

I made version #2 but with dried onion instead of fresh.

One thought on “Chicken Noodle Soup”