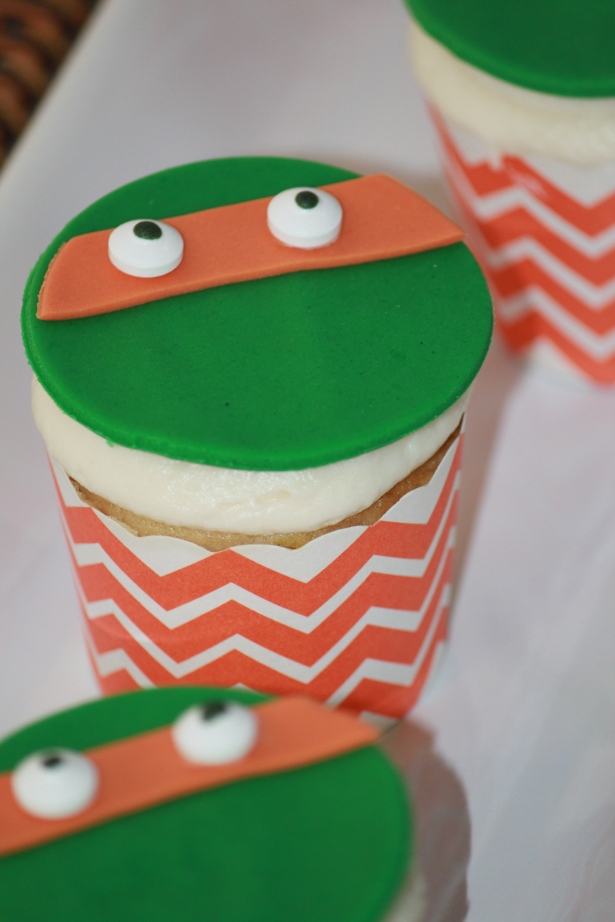 In addition to the mini Spider-Man cake, Eli also requested Teenage Mutant Ninja Turtles cupcakes, but only the orange one, who is Michelangelo.  These were a lot of fun to make!  Eli’s birthday celebration was on Friday so on Wednesday I made the TMNT cupcake toppers so that they would have time to dry.  I cut out 3″ rounds from Wilton green fondant then colored some white Wilton fondant orange using red and yellow dye (discovered at the last minute that I didn’t have any orange dye!), cut out the same size rounds in orange and then cut them into strips for the bandanas and placed them on the green rounds when both were still soft so no need for any water or anything to get them to stick together.  I let them sit on parchment covered cookie sheets in my kitchen which is the warmest room in the house during the winter so that they would dry.  On Friday they were pretty much dry so I attached the candy eyeballs with a bit of frosting then let them sit so that those would dry.  I baked some funfetti cupcakes in those cute chevron liners from Pick Your Plum, frosted them with my favorite Basic Buttercream Icing with a #2A tip in a flat pattern not a peaked one like you would normally do and then pressed a TMNT cupcake topper onto each cupcake.  So cute!  Here is a pic of the cake and cupcakes together ready to go to the birthday boy: