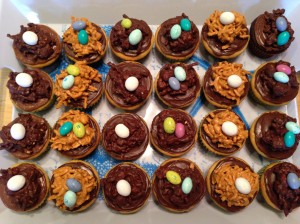 I decided that I needed a food project yesterday and lucky for me the Young Women and Young Men were meeting together today at church for a lesson so I decided to get a jump on some Easter baking and make some cupcakes for them.  I had this idea rattling around in my head for a little bit now after I saw a picture of an Easter cupcake similar to these with the nest made out of shaved chocolate and that got me thinking about these Easter nest treats and how cute they would look on cupcakes.  The cupcakes are easy to make and put together but they are a little time consuming since you are actually making two separate treats.

First I baked a batch of yellow and a batch of chocolate cupcakes in these cute green and dark pink polka dotted cupcake liners that I got from my favorite website in the whole world called “Pick Your Plum” (sorry that you can’t really see them in the pictures but trust me they are cute and springy!) then once the cupcakes were cool, I frosted them with these tasty Hershey Spreads in chocolate and chocolate with hazelnut (you can find them with the peanut butter at the grocery store): 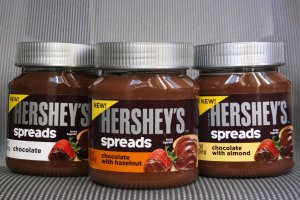 I needed something to keep the nests attached to the cupcakes and this did the trick.  Next I mixed up 2 batches of Easter Nest treats, one of the chocolate kind and one of the butterscotch kind, (you can find that recipe here), making them small enough to fit on the top of the cupcakes.  I refrigerated them before putting them on the cupcakes.  When they were set after being in the fridge about 30 minutes, I stuck them to the top of the cupcakes.  I used a White Chocolate Cadbury Mini Egg on half of them and then on the other half, a couple of Easter Milk Chocolate M&M’s.  Here’s a closer look: 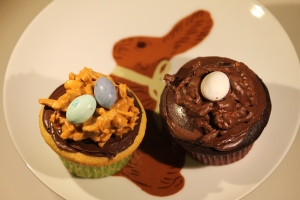 I made about 4 dozen cupcakes and only 3 were left after the kids were done so I’d call that a success!  🙂