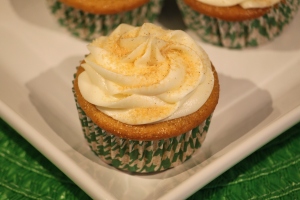 And, finally, the last recipe from the neighborhood party last night, one last cupcake recipe.  This one comes from the inside of the Duncan Hines cake mix box but you can find it here at “Duncan Hines”.  I haven’t tried one of these and probably won’t, I will always choose chocolate over any other type of cupcake!  🙂  But they smelled delicious while baking so I’m sure they’re good if you’re not as into chocolate as I am!

4  Place 1 – 2 slices of apple from the pie filling on top of each filled cupcake liner.  (Some of the slices of apple were really big so I had to cut them in half to get them to fit on the cupcakes.)

5  Bake 18 – 21 minutes or until toothpick inserted into cupcake comes out clean.

6  Let cupcakes cool for 5 minutes before removing from pans.

7  Pour packet of flavor mix into can of frosting and stir until well blended.

8  Frost cupcakes with frosting and garnish with sprinkle of cinnamon.

*I couldn’t find their frosting at Winco so I frosted the cupcakes with my buttercream icing and then topped them with my Alison’s Pantry Cinnamon Vanilla French Toast Sugar.