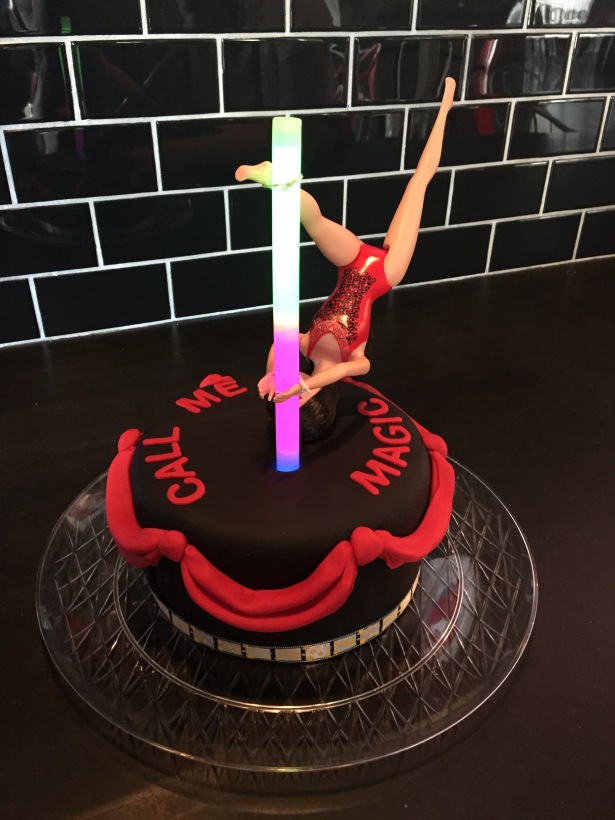 So, um, yes, that’s a stripper cake and yes, there is a story behind it which I’m about to tell you.  A few years ago when we were in England filming at Pinewood Studios in their big huge water tank, we had working with us what I can only assume to be one of the best dive teams in the world and one of those divers was a guy named Magic which my friend Annie who does wardrobe thought was the best name in the world, apparently.  The next day we’re riding the tube into London and Annie announces that she would like us all to call her Magic from now on.  There were a few moments of silence and then one of us, I think it might have been Anna K who also does wardrobe, said, “Isn’t that a stripper name?” which was followed by another few moments of silence and then lots of laughter.  So ever since then, every now and then, Magic gets resurrected and sometimes it’s in cake form!  And now you know.

Here’s the deets on the cake, it’s a chocolate fudge cake from the White Almond Sour Cream cake recipe and the frosting is our favorite Basic Buttercream Icing.  The black fondant is Duff’s brand and the red is Wilton, both purchased from Michaels.  The “pole” is a glow stick from the dollar store and I found that Barbie at Target.  We had to tie her to the pole because we couldn’t figure out any other way to get her to stay there.  Happy Birthday Magic aka Annie!  We love you!