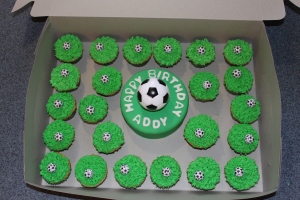 I had another friend call to cash in on her coupon from the wedding for baked goods.  It was her daughter Addy’s birthday and she wanted a soccer cake or cupcakes so I said why not both?  I think this is my favorite thing to do for birthdays, a mini cake for the birthday person and then cupcakes for all the birthday guests.  Addy likes white and/or vanilla cakes so I made a batch of French Vanilla cupcakes and added about a cup or so of white chocolate chips to them, then frosted them with green frosting and the Wilton tip for grass and then stuck a chocolate soccer ball on top of each one (which I found a Zurchers along with soccer cupcake liners).  I baked a 6″ round mini cake from the White Almond Sour Cream cake recipe, frosted it with the green frosting also then covered it in Duff’s green fondant (from Michaels), cut out the letters in white fondant and then topped it with a plastic soccer ball filled with gum (another Zurchers find!).  I think they came out pretty cute!  Happy Birthday Addy!