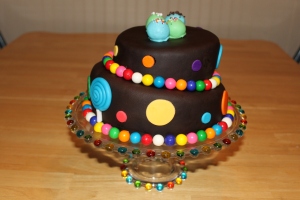 Courtney’s 20th birthday was on Thursday and I have been waiting for her to be gone for a long enough time for me to make her birthday cake.  She had to go to work on Friday from 4:00 in the afternoon until 2:30 in the morning so I finally had my chance to do it.  Cort and I have seen these candy themed cakes on the internet and have always wanted to try one so I decided I would do it for her bday because it didn’t look too hard and I had to do it on my own.  I wanted to cover it in white so that the colors would really stand out but the white Pettinice fondant I had was so sticky (perhaps because it’s been so warm lately) that I couldn’t use it so I went with the Satin Ice Dark Chocolate fondant which actually worked out well for the candy cake to be covered in chocolate.  The cake is also dark chocolate based on the White Almond Sour Cream Cake recipe and the frosting is my standby buttercream icing.  I made little cake balls for the top but didn’t have any candy melts to dip them in so I just dipped them in melted frosting which is part of the reason they don’t look as good as regular cake balls which are all smooth and shiney.  The balls lining the layers are actually gum balls that I got in the bulk food section at Winco.  Then I made a couple of lollipops out of fondant for either large end of the topsy turvy layers and then finished it off with some multicolored circles cut out of fondant to keep with my circle themed cake.  The cake platter was given to me for my birthday by my friend Barbara and went so well with this cake (thanks Barb!).  Happy Birthday to my baby, who is no longer a teenager which means I’m old!  I love you Cort!