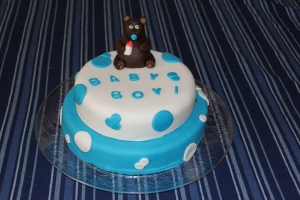 I’ve been working long hours on this movie and so haven’t had a chance to bake very much let alone blog about baking but last weekend Courtney made this cake all by herself (I did bake the cake for her – brown sugar) for the sister of a friend and she did such a great job that I wanted to share it with you all!  She had to do it all alone as I was at work and so came up with the design and did it all by herself and I think it is just darling!  The bottom layer is an 8″ round and the top is 6″, both brown sugar using the “White Almond Sour Cream” cake recipe as a starting point and just replacing the white sugar with brown sugar.  She made our favorite basic buttercream icing and used some Wilton fondant for the white as we had some leftover, the blue fondant is Duff’s from Michaels and the brown is the Pettinice chocolate fondant that we like.  She did a great job on the little bear with his bottle and his pacie, she is getting really good at sculpting things out of fondant.  She has another baby shower cake to do next weekend, this one for a little girl which she will also have to do by herself since I will still be working.  And we have some other fun cakes coming up in the next couple of months – Hunger Games, Muppets and Angry Birds so stay tuned!  🙂